February 5th, 2014 mark the 100th anniversary of the birth of William S. Burroughs, the rebel, the junkie, the exile and the genius that we love.

Burroughs, the postmodernist novelist, poet, spoken word performer and a key figure of the Beat Generation.

Fear and the Monkey – A poem by William S. Burroughs

Author’s note: This text arranged in my New York loft, which is the converted locker room of an old YMCA. Guests have reported the presence of a ghost boy. So this is a Oui-Ja board poem taken from Dumb Instrument, a book of poems by Denton Welch, and spells and invocations from the Necronomicon, a highly secret magical text released in paperback. There is a pinch of Rimbaud, a dash of St-John Perse, an oblique reference to Toby Tyler with the Circus, and the death of his pet monkey.

Turgid itch and the perfume of death
On a whispering south wind
A smell of abyss and of nothingness
Dark Angel of the wanderers howls through the loft
With sick smelling sleep
Morning dream of a lost monkey
Born and muffled under old whimsies
With rose leaves in closed jars
Fear and the monkey
Sour taste of green fruit in the dawn
The air milky and spiced with the trade winds
White flesh was showing
His jeans were so old
Leg shadows by the sea
Morning light
On the sky light of a little shop
On the odor of cheap wine in the sailors’ quarter
On the fountain sobbing in the police courtyards
On the statue of moldy stone
On the little boy whistling to stray dogs.
Wanderers cling to their fading home
A lost train whistle wan and muffled
In the loft night taste of water
Morning light on milky flesh
Turgid itch ghost hand
Sad as the death of monkeys
Thy father a falling star
Crystal bone into thin air
Night sky
Dispersal and emptiness.

And The Hippos Were Boiled In Their Tanks 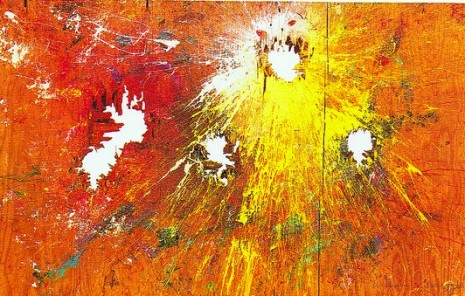 “The first and most important thing an individual can do is to become an individual again, decontrol himself, train himself as to what is going on and win back as much independent ground for himself as possible” – William S. Burroughs

Burroughs, a source of inspiration for many artists.

William S. Burroughs and Joe Strummer of The Clash